Unfolded Torus is a brain challenging game formed by a sequence of scenarios called tori.

The main goal in each torus is to maximize the score using the least number of moves.

A scenario is formed by square tiles, each tile can contain a number. The score is determined only by the following two rules:

Below, some scenarios are displayed. Observe that tiles which contribute to the score are colored and tiles which yield a double score are in a bold rounded shape. The first figure shows the initial scenario, the second is the configuration after two moves, the third is the final configuration achieved in 10 moves. 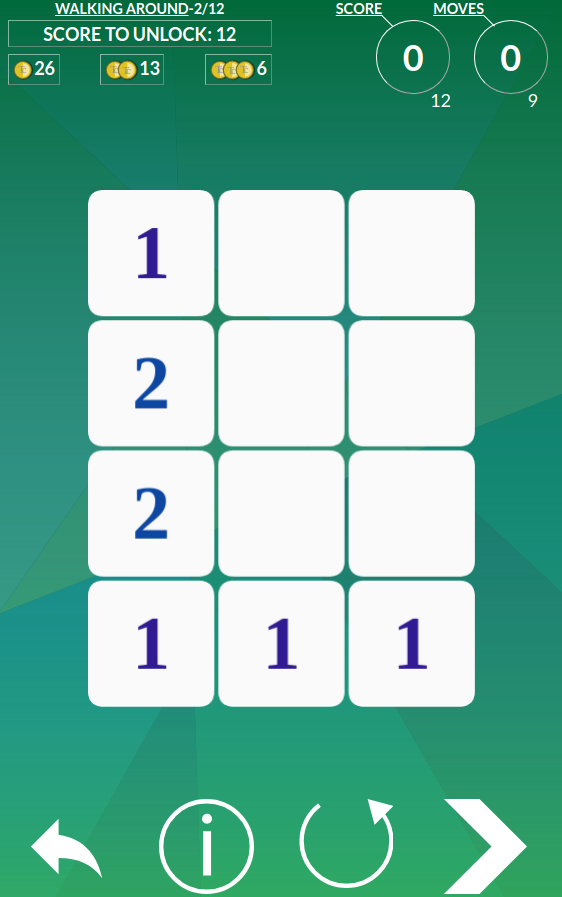 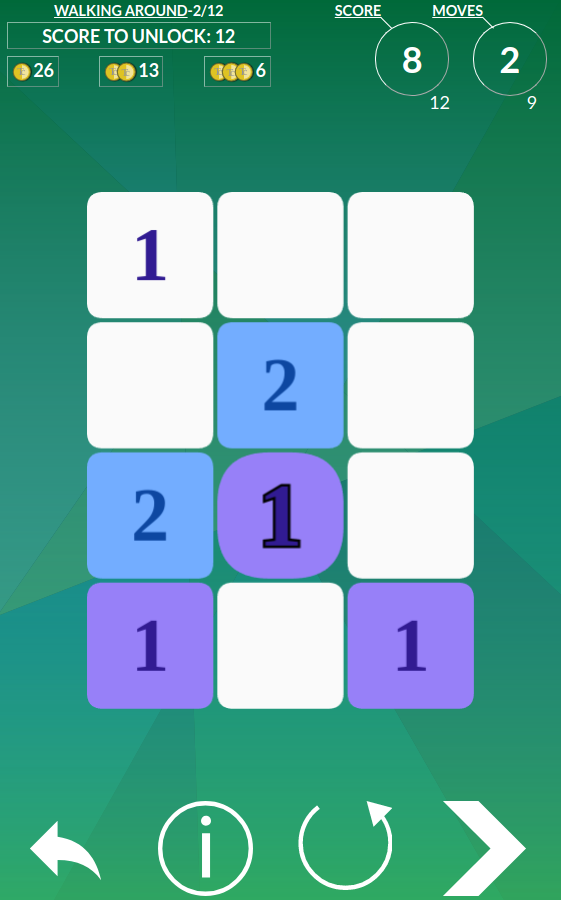 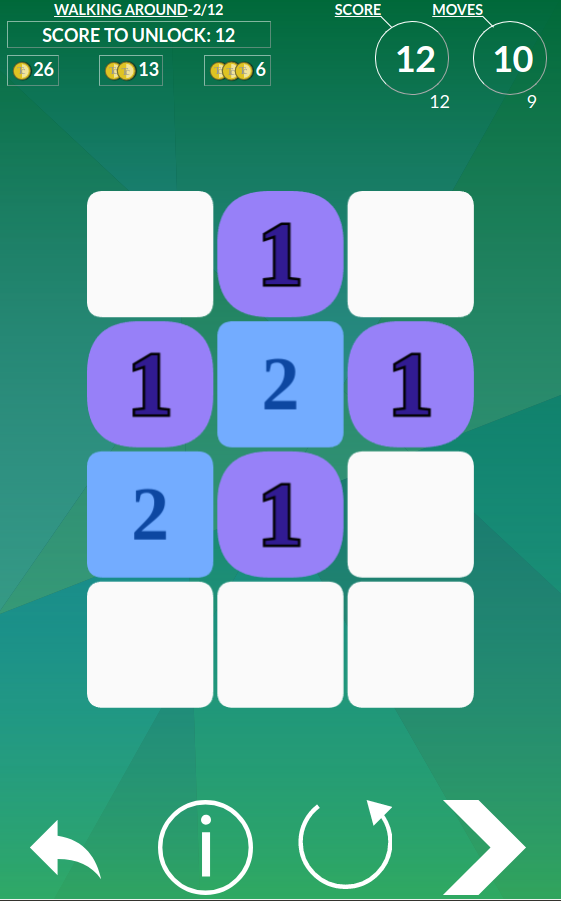 In the upper rightmost corner there are two circles containing the current score and the number of moves.

In the layout of a scenario there may be some missing tiles. A missing tile behaves like a direct connection between the neighbor tiles. Here are some examples. 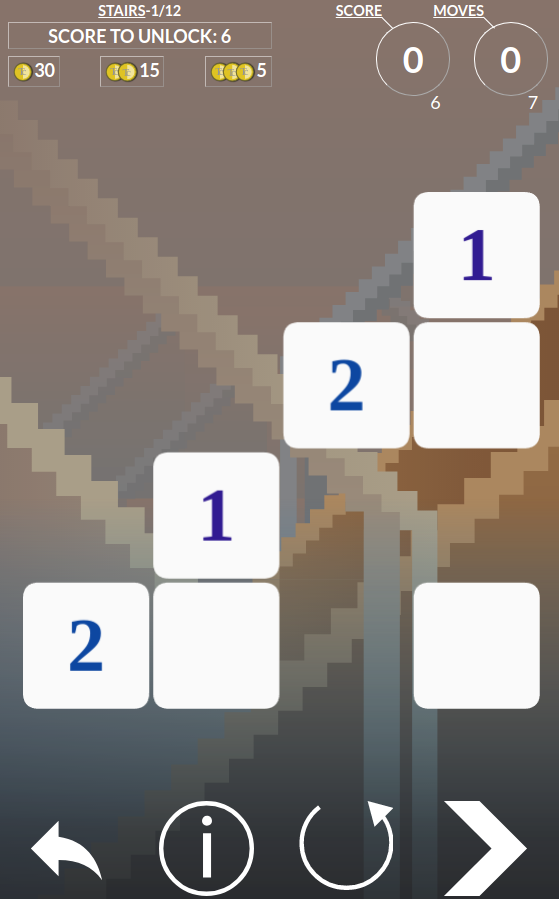 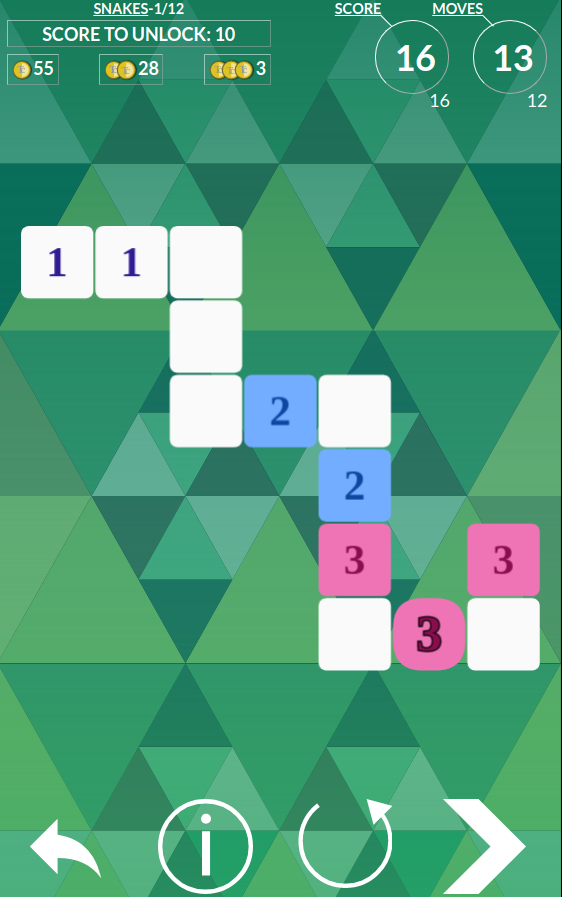 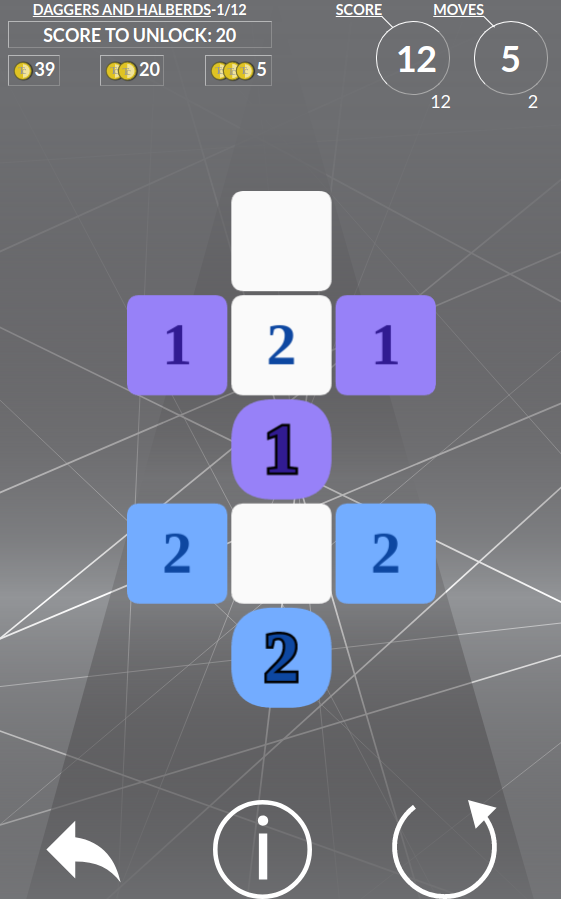 Here are three examples of some initial layouts together with the configurations of maximum score. 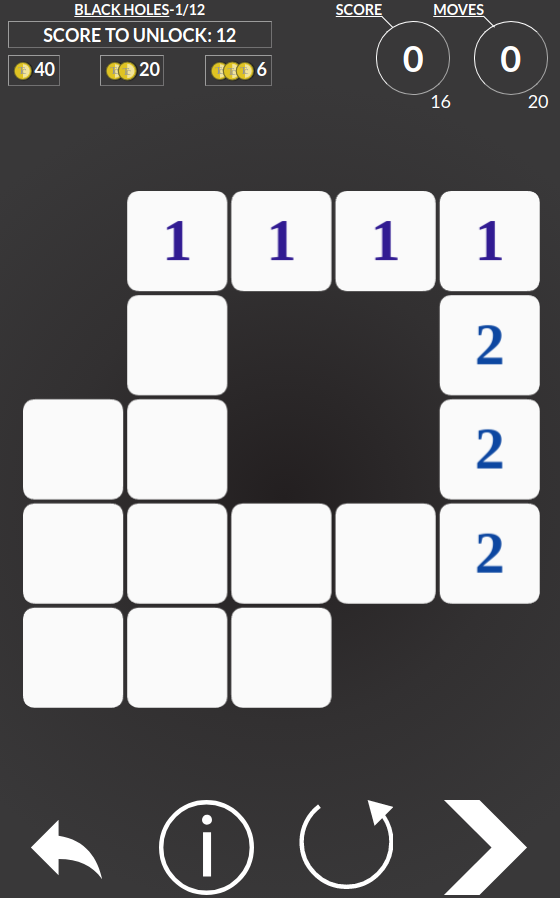 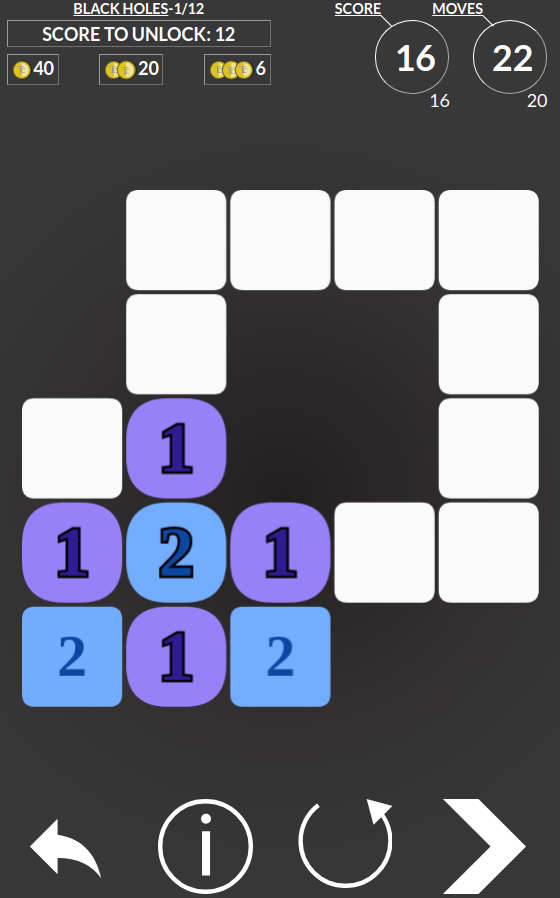 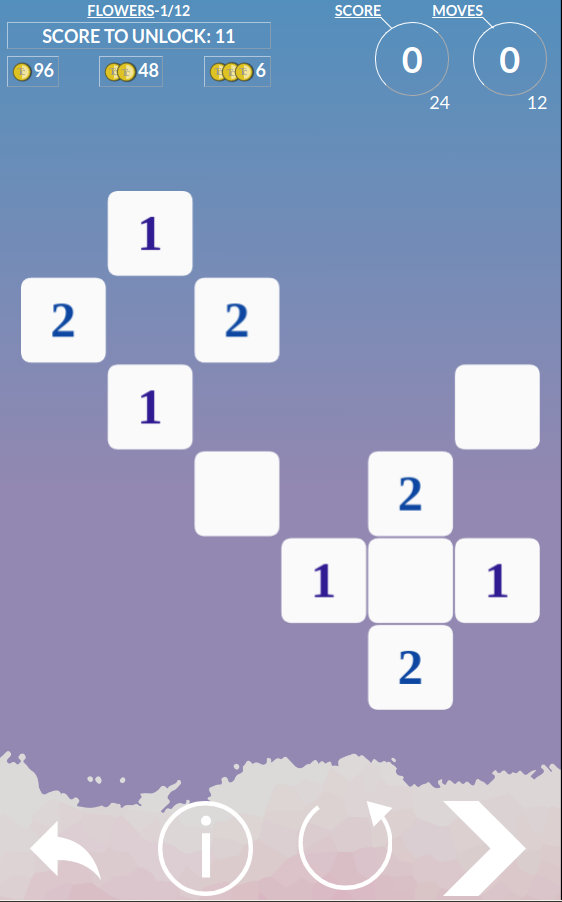 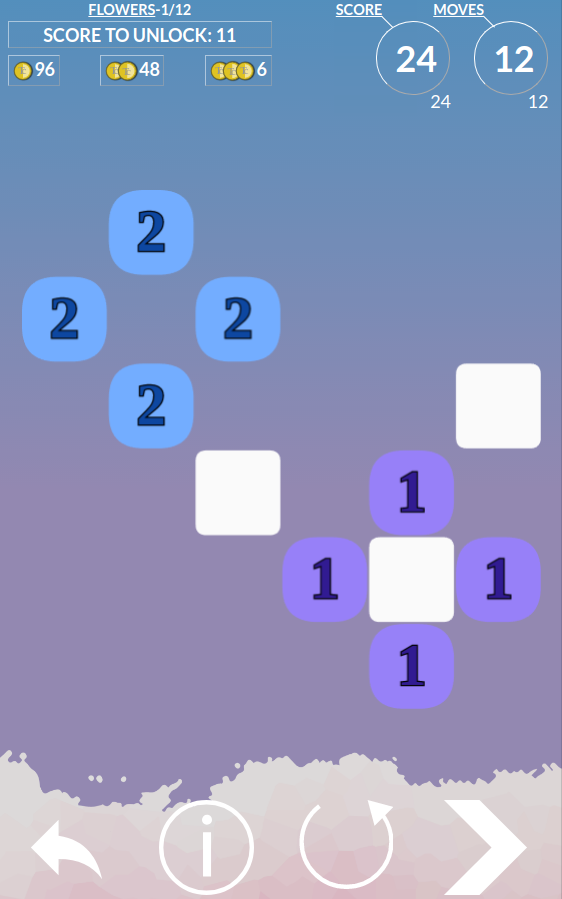 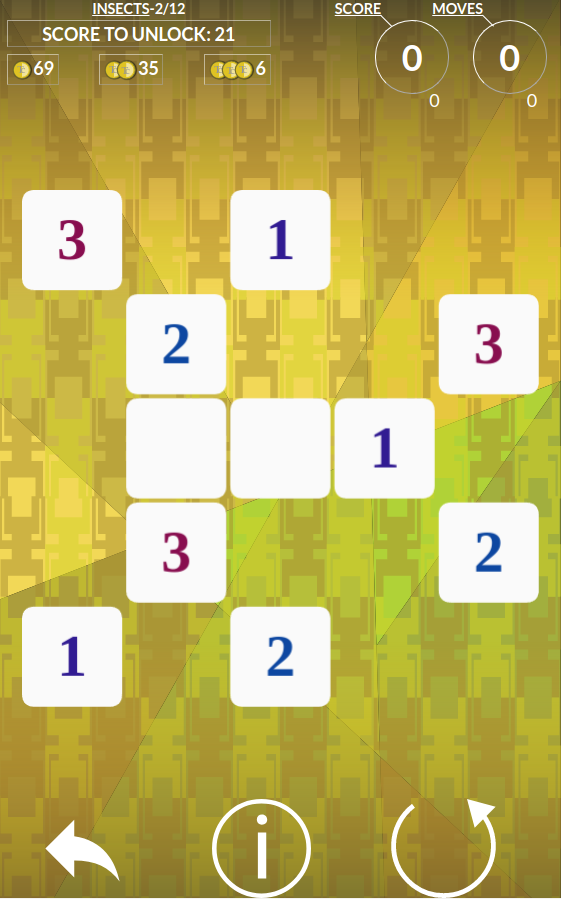 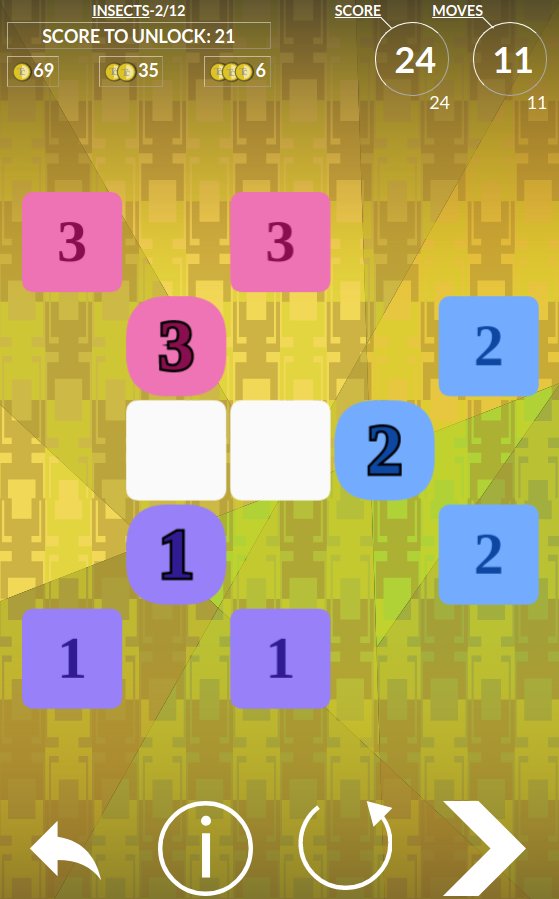 Tori are grouped in packs. Within a pack you have to start from the first scenario. Only if you reach a minimum score you can unlock the torus and access to the second scenario and so forth, until you complete the entire pack. The layouts of the scenarios contained in a pack are displayed just when you open a pack. Below you will find some samples of packs. 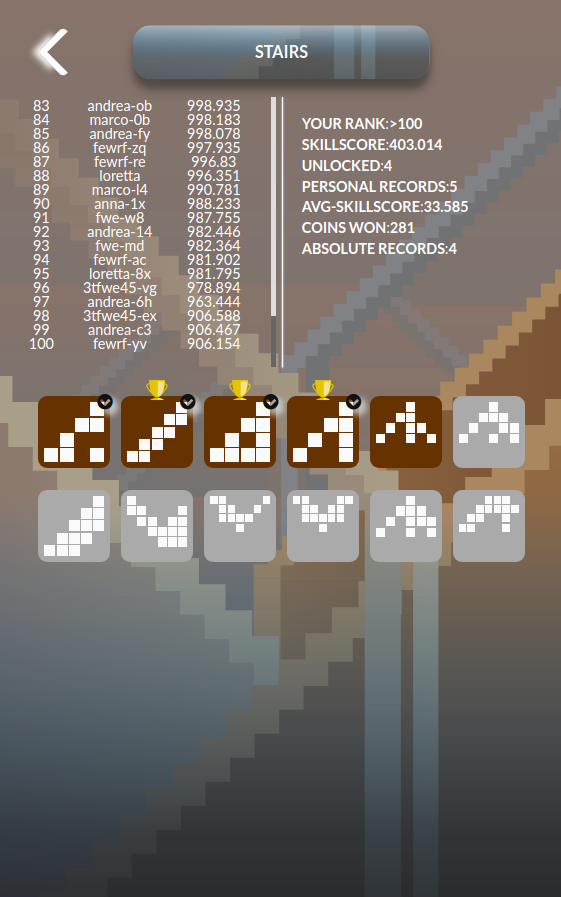 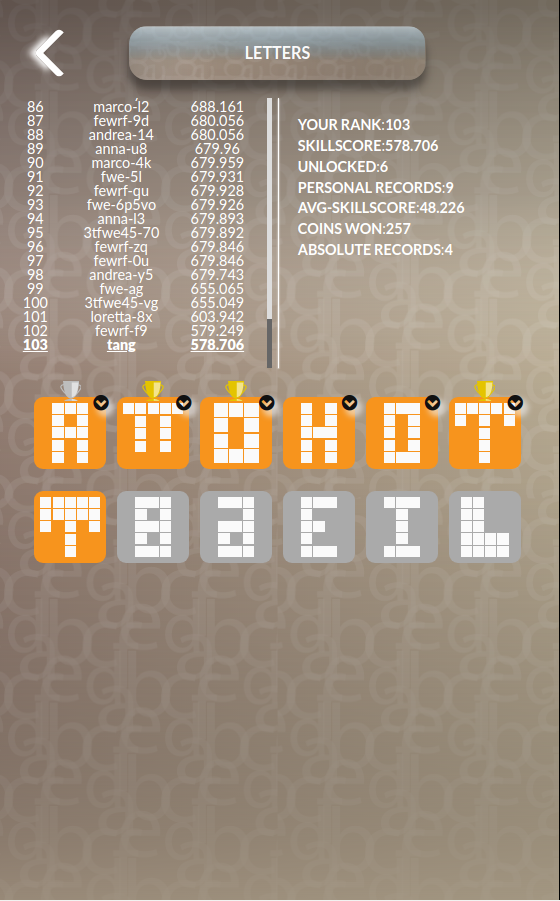 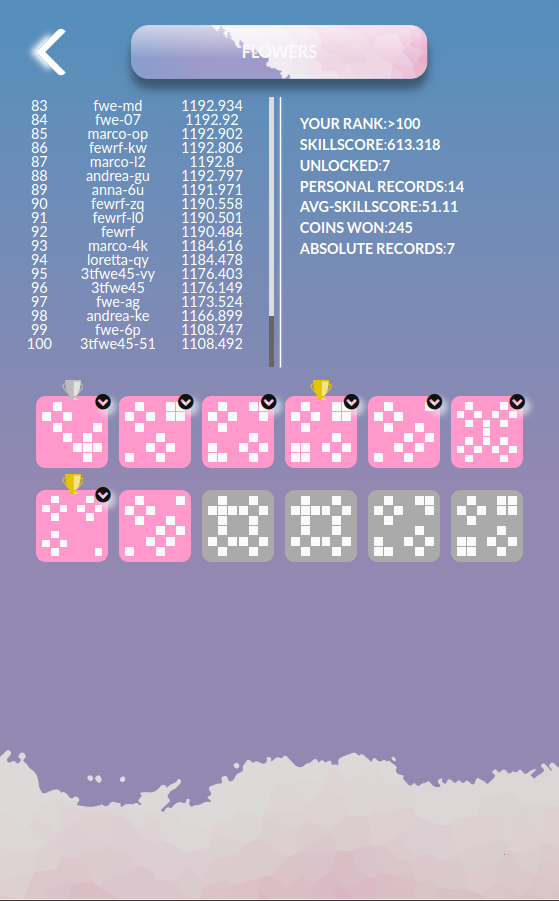 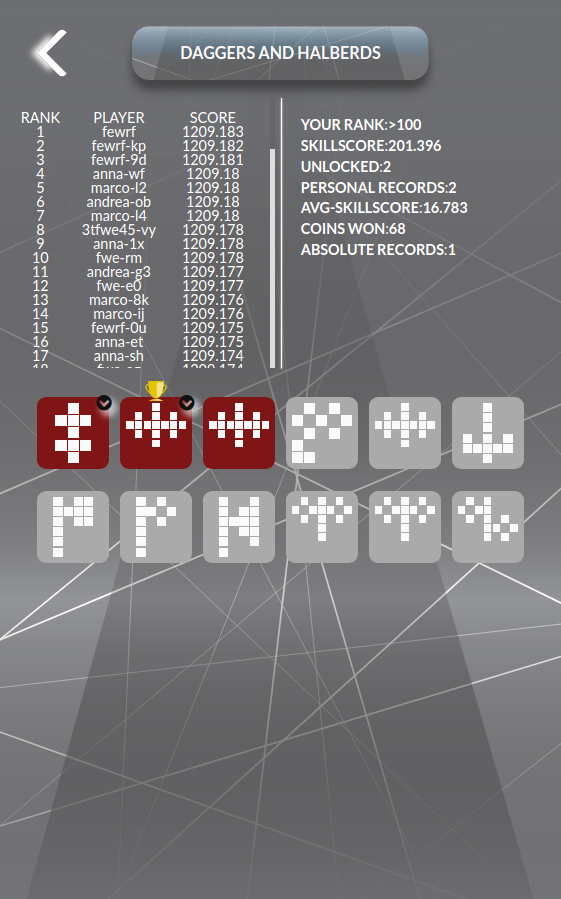 The icons of the unlocked tori have a tick and are colored, the tori which you are allowed to play are colored. For the tori where you hold an absolute record the icon has a cup on top. This is a golden cup if you are the first to achieve the current record, it is a silver cup otherwise. You can play packs in any order. However, it is advised to start playing the Tutorial pack and then the subsequent packs in the proposed order.

When you click on the icon of a torus, you get a screen with some information including: the minimum score needed to unlock the torus, the limit number of moves that you cannot exceed, your personal records and the records achieved by the other players. Below is a sample of this screen. To start playing you have to click on the big triangle in the bottom of the screen. 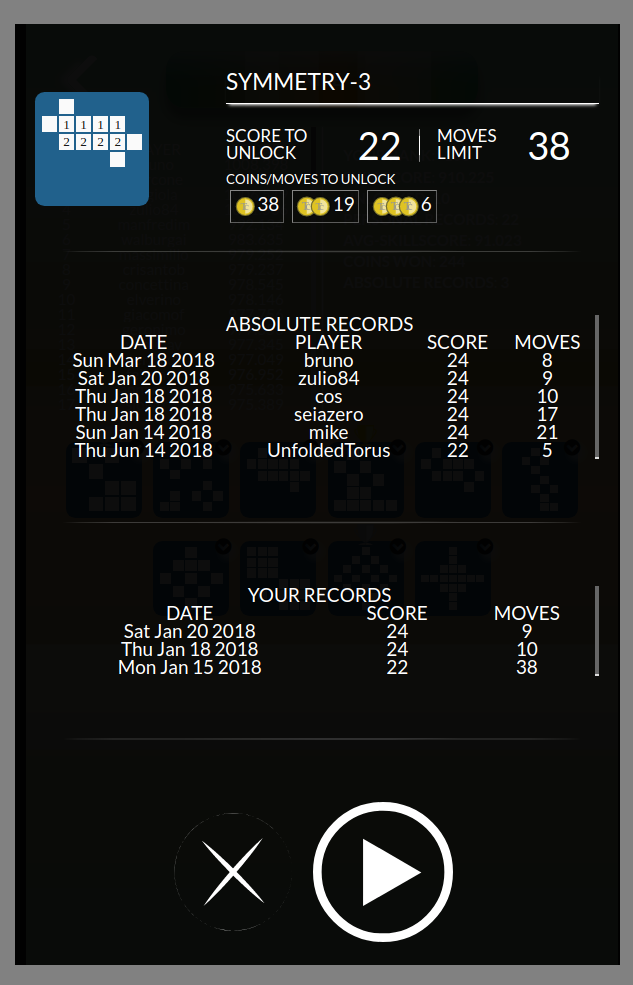 In the initial screen of the game you have the list of the available packs. There are 13 free packs for an overall number of 147 tori. There are 30 more packs which are available and can be bought. They contain an overall number of 381 tori. In order to buy a pack you just have to click on the name of the pack. Below, you find the initial screen of the game. 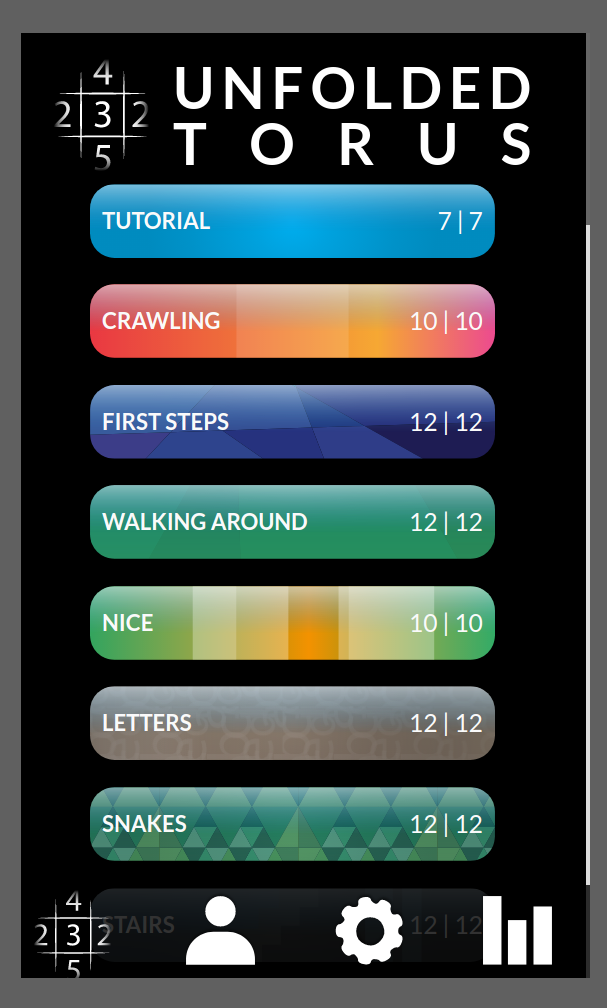 A skill score is assigned to each player, the skill score estabilishes a ranking of all the players. You can read your skill score, your statistics as well as the rank of the first 1000 players, while playing the game. If another player improves a record of yours, then you receive a message notifying this improvement. The skill score is assigned according to this principle: who reaches the maximum score with the minimum number of moves just at the first attempt gets the maximum skill-score. More information are given in the FAQs.

The rank is updated every 5 minutes. 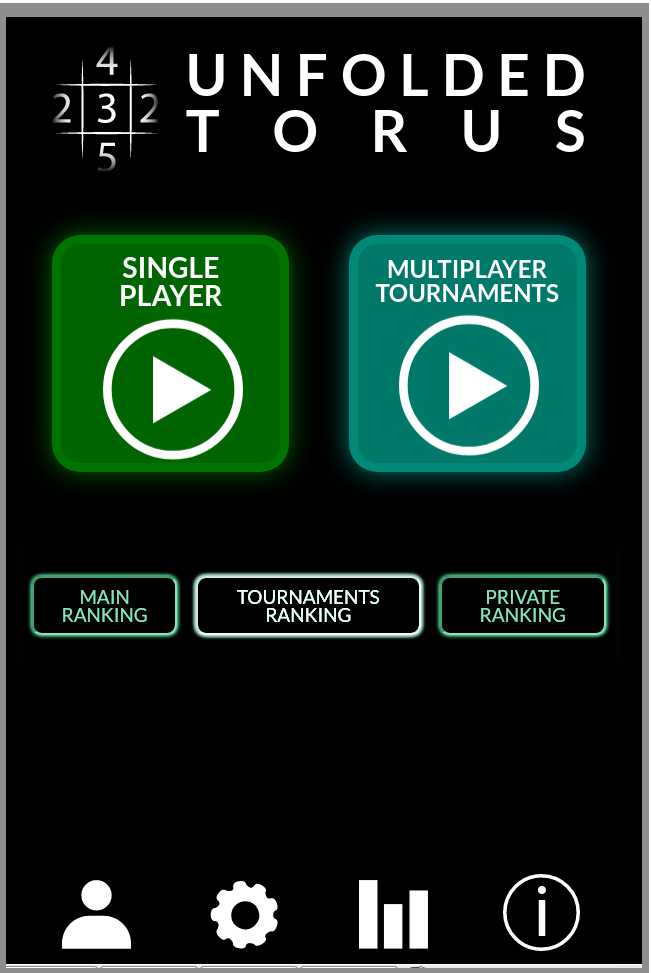 It is possible to play in multiplayer mode by clicking the button MULTIPLAYER TOURNAMENTS. You may choose among 3 types of tournaments:

The playable tournaments, higlighted in light blue, can be chosen by clicking on the red button BUY-IN. You may start playing just by clicking on PLAY.

Each tournament has a small cost in terms of coins. In turn, if you reach one the top positions in the score, you will earn some coins depending on the number of players participating in the tournament. Every day, you may chose among many scenarios having different levels of difficulty, play them and compete with other players on the Web. To access a tournament just click any accessible tournament in the list.

In order to be ranked, to have records and stats in sync on more devices, and to receive notifications about record improvements, it is required to login with google+ and to register on UnfoldedTorus' server choosing a username.

If you should encounter any problem or detect some bug, please send a report to unfoldedtorusgame@gmail.com.

Playing free packs, you'll have to solve small to medium tori (9 to 40 tiles).
Unfolded Torus Games becomes very challenging on larger tori. In fact, finding the optimal solution would be hard even for a brute force algorithm on a very fast computer.
For example, solving an 8x8 torus by means of an exhaustive approach would need to test 819,628,286,980,802 different moves sequences in the "easy" case where the optimal solution is reachable just in 10 moves. Moreover, the number of different configurations that an 8x8 torus can take, assuming each tile contains a different number, is as large as 1.2689e+89. More than the number of atoms in the known observable universe. Even a fast computer would take several years to complete the computation. In fact, finding a non-naive (brute force) algorithm is not an easy task.

The goal is to maximize the score, possibly, with the minimum number of moves.

The allowed moves are:

Equal numbers placed along diagonals sum up to the score when they touch each other. A number belonging to two diagonals is counted twice (once for each diagonal).

The game is organized into packs. Each pack contains a set of tori having different layouts. In order to play a torus in a pack you must have unlocked the previous tori in the same pack. You may start with any pack, but we strongly suggest you to follow the default order. Unlocking a torus means to reach a minimum score which is displayed in the top left corner during the game.

During the game, you may earn some coins when you unlock the torus or you improve your score. According to the number of moves used to unlock, you may get 1, 2, or 3 coins. Each time you improve a personal record in terms of score, you earn two coins. If you beat an existing global record, either by improving the score or by reducing the number of moves, you get a much larger number of coins depending on the value of the record.

You may access tournaments and compete with other players in the Web.

You can do it only if you've unlocked the previous ones. For instance, you can play the third torus after that you have unlocked the first two tori in the pack.

Unlocking a torus means to reach a minimum score which is displayed during the game. Indeed, you may do more trying to improve your record or to beat the current absolute torus record.

You may have this information just by clicking on the torus thumbnail inside a pack, or you can read it on top panel while playing. You will get the minimum score to reach and the number of moves that you are not allowed to exceed. You will find also the current record for this torus together with the name of its owner.

You may have this information, together with the name of its owner, just by clicking on the information icon inside a a torus.

If another player improves a record of yours, then you receive a message notifying this improvement.

Each torus has a limit in number of moves, if you pass this limit any record you make is not taken into account. You may reset that torus to restart from scratch with ZERO moves. (NB your records wont be canceled if you reset the torus, resetting just affects the current game).

To any player it is assigned a skill score which is independent of the number of earned coins. It depends on the score achieved in each torus, on the number of moves employed, and on the way the score has been reached.

It is the sum of the Pack-Ranking of each pack

In most cases it coincides with the maximum score you can get. Sometimes it could be slightly larger. This happens when in the layout there are many holes or negative numbers.

Yes you can do it. You need to login using the same google account and wait for the sync complete message.

Just click on the button MULTIPLAYER TOURNAMENTS in the main screen and then buy an available tournament by clicking on BUY-IN and then on PLAY. Participating to a tournament has a small cost in terms of coins.